After just under a year and a half working as Public Engagement Project Officer for ORION Open Science at the Babraham Institute, I was delighted that my proposal for the Engage Conference 2018 was accepted for the poster party!

The ORION Open Science work package I lead at Babraham is about co-creation; however, my proposal for Engage was about a public attitudes survey that we have conducted in six European countries. How do these two topics relate? The idea behind it is to understand our audience better before embarking on the process of co-creation. The survey gathered information on what the public in six of the ORION Open Science participating countries think about life science research, public involvement, and genome editing to facilitate later project tasks – such as a public dialogue on genome editing that we are conducting this year.

I’d heard a lot about the Engage conference – several colleagues attended last year and shared the first deliverables of ORION Open Science: a co-creation menu that I developed shortly before going on maternity leave. A lot has happened since, so the nurturing and multidisciplinary Engage conference seemed the perfect place to discuss my project’s progress/future plans and get inspired by the plenary session speakers!

To show the kind of inspiration that I got from speakers and contributors, here are some nuggets of wisdom:

The university where I obtained my PhD degree in Cellular Biology, Utrecht University from the Netherlands, was also present at the conference. They brought a very intriguing public engagement challenge to tease the audience. Below, I share the results of my latest experiment to add to the growing evidence regarding the mysterious contents of the orange cube that the Utrecht University public engagement team brought to Edinburgh (Figure 1): 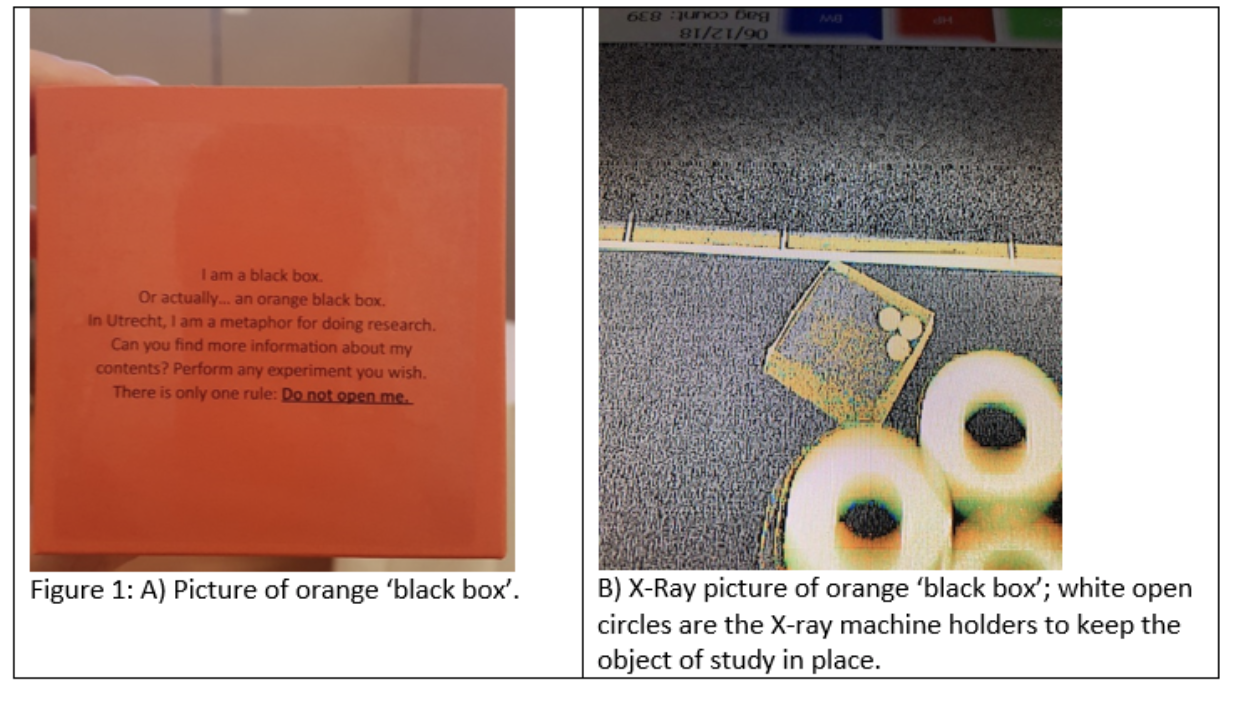 Figure 1 shows our metaphysical analysis of the orange ‘black box’ contents. This public engagement gadget encourages audiences to think scientifically and investigate the content(s) of the box without opening it (as scientists can often not open the object of their research – but must make deductions through experimentation) (A). Accordingly, we performed X-rays of the orange ‘black box’ (B). As shown in panel B, the cube of study contains three objects of a circular nature. Previous kinetic and sound experiments indicated that the contents are of solid material.

Whist replicating kinetic experiments, one of the early career public engagement staff in our department accidentally mis-performed the experiment resulting in one of the mysterious objects falling out of the box. We conclude that: 1) my colleague needs further training into holding objects tightly; 2) the content of the orange black box is… contact emma.martinez@babraham.ac.uk

Acknowledgements: We would like to thank Babraham Institute scientists, our security department and colleagues at the Impact team for their meaningful contributions to the challenge as well as to Utrecht University public engagement team for providing materials and inspiring collaborative insights.

Acknowledgement: This article was originally posted in the blog of the National Co-ordinating Centre for Public Engagement.