Open Science at any cost?

Open Science is about making research more accessible to society. But how do we get there and what obstacles are in the way? These were the questions raised at a seminar arranged by the ORION partner VA (Public & Science) at the Almedalen Week in Sweden on 2 July.

Each year around 40,000 people from politics, civil society, business and academia descend on the island of Gotland in Sweden for the Almedalen Week to discuss a wide range of current societal issues in a week-long programme of seminars, debates and events. In other words, a perfect place to discuss Open Science, how it can be implemented and how to involve and engage society in research.

Among the speakers at the seminar was Thomas Neidenmark, Policy Officer for Open Science at the European Commission, who presented the Commission’s vision for Open Science. By becoming more open and more co-operative, research can be of higher quality, have greater impact and give more value to society. He described it as a paradigm shift. In order to facilitate the transition, the European Commission will establish an infrastructure, the European Open Science Cloud, where researchers will be able to share data, skills and expertise. He stressed that there are expectations for the EU Member States, who jointly decided to go towards Open Science. In order to develop standards and indicators that measure goal fulfilment, all countries need to be coordinated.

The public wants to be involved

Martin Bergman, a researcher at VA, talked about the public’s attitudes to science and researchers. Three-quarters of the Swedish population believe that it is important for the public to be involved in research. In the annual VA barometer the participants have also stated how they want to be involved. The largest majority of participants are willing to contribute by collecting data or donating material. The ORION survey "Public attitudes to life sciences research in six European countries" shows that interest in life sciences research is generally high among citizens and about two-thirds of the participants thought that it was very or fairly important that the public is involved in life science research. The study compared the attitudes in Italy, Czech Republic, UK, Germany, Spain and Sweden.

Universities have a key role in opening up the scientific community. New research-based knowledge is needed to solve global problems. Society also needs more well-educated members and have more people who can critically assess information in order to meet the polarization among the public. Students are crucial to societal change and need to be involved in society in a variety of ways during their education. Publishing research results openly is a matter of course for Malmö University, although there are some challenges.

Gustav Nilsonne, a researcher in neuroscience at Karolinska Institutet and founder of the Swedish Network for Evidence-Based Policy, talked about the importance of researchers making their data available, both for other researchers and for those who contributed data.

“The European Commission demands open access, which is good, but it is strange that researchers themselves have not been able to provide this,” said Gustav Nilsonne. At the same time, he was delighted at the high demand for knowledge and for researchers’ perspectives.

“I am proud of our Swedish politicians who are trying to conduct a knowledge-informed debate and I’m happy that there is a consensus that we need to move towards Open Science. At the same time, we need to respect that the culture of the scientific community takes time to change."

Johanna Hansson, Chair of the Swedish Library Association, sees libraries as part of a democratic infrastructure, places where researchers and the public can meet and talk about research in an understandable way. She emphasised that the libraries equip people to be citizens, educate and increase their thirst for knowledge. Ultimately, this is about the legitimacy of research among taxpayers. Authorities and welfare services also need access to the latest research in order to make well-informed decisions.

“This is why we are pushing so hard for Open Access. By using libraries and knowing how to find information and relate to sources, you understand what research is and how knowledge is formed in practice,” said Johanna Hansson. 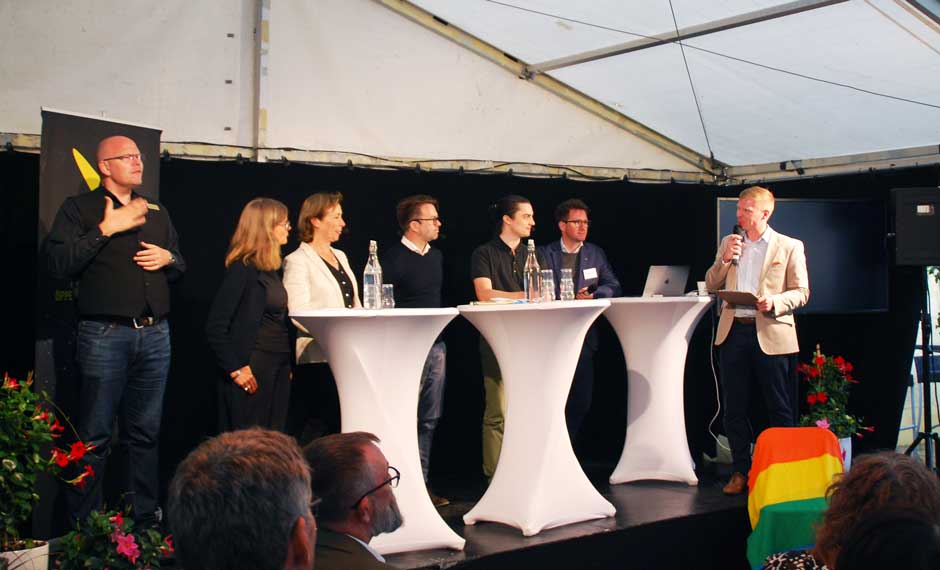 The around 60 participants at the seminar discussed in small groups how the public can be involved in research. Several mentioned crowd-sourcing and citizen science – that citizens can contribute to the development of new research-based knowledge through the collection, examination and analysis of data. Anders Fundin, Research Manager at SIQ, the Swedish Institute for Quality Development, mentioned how companies and civil society organisations can be involved early on in the process, for example by developing research questions together with researchers.

Anna Jonsson, Senior Lecturer in internationalisation processes and knowledge sharing in organizations and society at Lund University, thought that it has become more difficult for researchers to collaborate with public authorities and organisations – despite much talk about the importance of collaboration, this is probably due to cut-backs and lack of time.

Politicians can contribute by involving the public more in research, for example through providing funds in the next Swedish research bill. Higher education institutions and researchers should lead the work of opening up science. Betty Malmberg, Member of the Swedish Parliament (M), highlighted research where patients and their relatives are involved – from the very beginning to the point at which results are presented. Ilona Szatmári Waldau, Member of the Swedish Parliament (V), stated that citizens who participate in research projects need feedback on how they have contributed to the development of new knowledge. She also said that politicians should make it easier for the public to access research results, and specifically mentioned that government research data, should be openly available.

The fact that the merit grading for engaging the public in research and implementing Open Science needs to be increased was also raised during the discussions.

”We should put a value on collaboration, although politicians cannot put an exact price on how much it is worth. Instead it must be up to individual institutions to make such decisions,” said Betty Malmberg.

Sven Stafström, Director General of the Swedish Research Council, agreed that the issue of incentives is important. He stated that it must be carefully planned and the researchers need to be involved in the process. Thomas Neidenmark agreed that researchers need to be rewarded and valued when promoting Open Science. He stated that in recruitment, especially for key positions, it is also important to ensure that there is enough knowledge and competence about Open Science.

“The European Commission believes that all research will gain tremendously through Open Science. Anyone who can use their data in an efficient manner has a great advantage in the knowledge-based economy,” Thomas Neidenmark rounded off.

The participants all agreed upon that the responsibility for Open Science is shared. Research funding organisations, schools, study associations, companies, the public sector, libraries and the media all have a responsibility. The Open Science dialogue needs to continue, especially with the researchers themselves.