The first co-creation event of the Citizen Science project Genigma kick-started at the Centre for Genomic Regulation (CRG) in Barcelona in January where close to 40 participants engaged with their most creative ideas to develop an app to discover the genomic alterations in cancer cells. Genigma is one of the two Citizen Science projects that has received funding from the ORION project.

Professionals from a variety of fields such as research, medicine, bioethics, education, communication and arts gathered at the CRG to co-create the optimal narrative for the Genigma app, starting from the scientific question behind the game. Led by Oriol Ripoll and his team of gamification experts from Jocs al Segon and by the Citizen Science facilitator at CRG, Elisabetta Broglio, participants were first trained on the different ways to transmit a message or an idea. 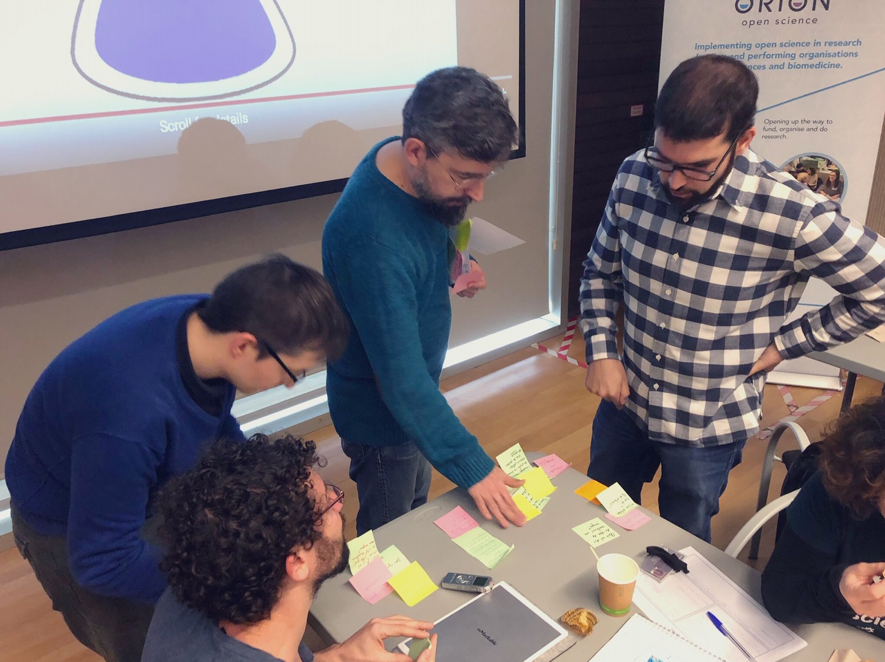 The scientific team of Genigma from CNAG-CRG were then challenged to present in 7 minutes the aim and the scientific question behind their project. The participants jotted down what they did and did not understand and provided this feedback to the scientists. Concepts such as “what is a cell line?”, “why are cell lines important in cancer research?” and “why is the human eye better than a computer in detecting differences in genomic patterns?” were recurring questions. From this wealth of information, all participants were given the challenging task to create metaphors of the key concepts such as DNA packaging. The facilitators really squeezed out all the creativity from everyone’s brains, but the outcome was very satisfying for the Genigma team. They are now trained in how to convey their ideas to a broader audience and are set to hold the second co-creation event on 9th March 2019 during which cancer patients and patients associations will participate.

Genigma is one of the two citizen science projects that has received funding from ORION. The project, managed by CNAG-CRG, will develop an app to discover the genomic alterations in cancer cells. The app will be developed in collaboration with citizens. By playing the Genigma game, citizens will provide key contributions in revealing 3D genomic structures in healthy and cancer human cells, helping to build a large dataset for the benefit of science and society as a whole.

Next step - Co-creation events in Barcelona

The next co-creation workshop will be organised on 9 March at 10:00-13:30 hrs at the Biblioteca of the Sagrada Família in Barcelona. A third co-creation event is planned for 29 March. For more information and registration please see the Genigma website.