The ORION citizen science project Genigma project has been selected as part of a NEWSERA initiative to increase the uptake of citizen science projects among academic researchers across the EU. This coincides with the launch of the Genigma game app which has been in development for two years by the Centre for Genomic Regulation (CRG).

NEWSERA is an EU-project funded under Horizon 2020 the EU Research & Innovation framework programme, that aims to improve the communications practices of citizen science projects in 5 key areas which are broken down into separate labs:

Genigma along with seven other citizen science projects from Spain, Portugal and Italy were selected, to take part in the “NEWSERA Academic scientists Lab”. The Lab is held digitally and consists of 3 different co-creation workshops which were designed to help expand the uptake of the projects within academic communities.

While the COVID lockdown has prevented in person workshop and co-creation events, the NEWSERA lab made use of digital tools like Miro to help facilitate workshop exercises like SWOT analyses. The Genigma team discovered that the value of their game was much clearer for participants and gamers than it was for academic scientists. The workshop then highlighted several important opportunities for clarifying the benefits of Genigma to academic research using examples of data that have been collected through the app’s development. The participants also raised the need to use specific strategies to help researchers understand the value of this new approach to data analysis, as citizen science is currently not very widespread in the biomedical field. 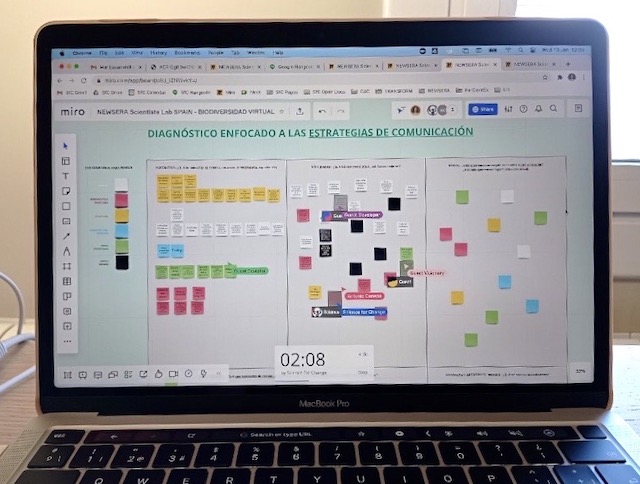 Citizen science facilitator of Genigma, Elisabetta Broglio said, “This is a great opportunity for us. This is a pivotal stage in the Genigma development and it is extremely valuable to have outside perspective from experts within academia. In the first workshop, we were challenged to show the value of the Genigma app to other researchers which really helped to solidify the key benefits. We will take this forward into the app launch and look forward to more interaction with the NEWSERA Lab. It is very important for the development of the Genigma game to make known the type of data that will be collected, its validity and robustness. Ultimately, we want as many cancer researchers as possible being able to use this data to advance their research.”

After the first workshop the team were excited and motivated to produce new material that was needed to engage scientific audiences which will be added to the NEWSERA website which will be used to disseminate the Genigma project and build new alliances and partnerships outside the CRG. Perhaps one of the most useful takeaways from the first workshop was a set of measurable goals that can be used to track the success of Genigma uptake in academic circles. Defining useful goals is a difficult and important exercise, but following through where success or failure lies. For this reason, in the interim between workshops, NEWSERA acts as a third party to track the goals and maintain clarity and accountability for all participants in the lab.

Taking part in the NEWSERA Lab as the Genigma app is being launched is perfect timing for the project. As more people use the app, the development team can now use new strategies for engaging the scientific community which is a critical component of this co-creation venture.

Please get in touch with Elisabetta Broglio, Citizen science facilitator of the Genigma project at the Centre for Genomic Regulation, CRG, visit the Genigma website or follow them on Twitter @Genigma3D, if you would like to have more information about the project and become a genome explorer!