What does the public expect from genome editing in life-sciences? ORION Public Dialogue event

On Thursday 11 March the ORION partners hosted an online event to share the findings of ORION public dialogues on genome editing with relevant stakeholders in the research community. The findings are detailed in the corresponding reports of each of the countries where the dialogues were conducted during 2019-2020: the United Kingdom, Germany, Sweden and Czech Republic. The objective of the dialogues was to explore public attitudes towards the use of genome editing technology in fundamental life sciences research in order to inform research organisations when and how to engage the public with emerging technologies.

The online event was attended by 75 participants mainly from the research community as this was the primary audience of the event. Participants represented the countries where the public dialogues took place as well as others, including Norway, Italy and Belgium. Emma Martinez, coordinator of the dialogues, at the Babraham Institute, introduced participants to the design and implementation of this multinational dialogue. She then shared some of the main findings from the UK and was followed by the organisers of the public dialogues in the other participating countries: Ester Jarour, CEITEC, Czech Republic, Zoe Ingram, MDC, Germany and Maria Hagardt, VA (Public & Science) Sweden, who shared their main findings too.

During the event, participants also heard perspectives from four different researchers who participated as experts during the dialogues; Tomas Moravec, Head of the Laboratory at the Institute of Experimental Botany of the Czech Academy of Sciences in the Czech Republic; Dr Andreas Ofenbauer (a former MDC scientist) from Germany;  Fredrik Wermeling, a researcher at the Karolinska Institute in Sweden ;and Dr Carine Stapel, a Marie Curie Fellow at the Babraham Institute in the UK. Each shared their views on the value of participating in the public dialogues and what they learned from it.

Similarities and differences encountered in the public dialogues in the different countries were presented by David Hills from Ipsos Mori, the organisation commissioned to conduct the dialogues. Some of the similarities encountered were that people support basic research but that awareness of genome editing is quite low across participating countries. Somatic editing for medical purposes is generally accepted, while germline editing of human traits is not acceptable. Moreover, the biggest worry of the participants was the use of germline editing and editing human traits due to possible ethical implications on society and unknown or unintentional consequences. Regulation of the technology was found of paramount importance with dialogue participants calling for public-facing documentation about the current state and possible future applications - including risks, benefits, and regulatory guidelines applying to the use of the technology.

“The findings in this dialogue hinted towards a lack of public understanding of fundamental research and called for a more collaborative approach to better manage expectations. Research organisations could do better at involving society in their practices, to test assumptions and make research and innovation more relevant. The dialogue is a timely contribution to ongoing discussions around the development of governance frameworks, such as those by the World Health Organisation on human genome editing and by Wellcome on emerging technologies, where public engagement and ethical considerations are seen as key elements of good oversight.” Dr. Emma Martinez, Coordinator ORION public dialogue. 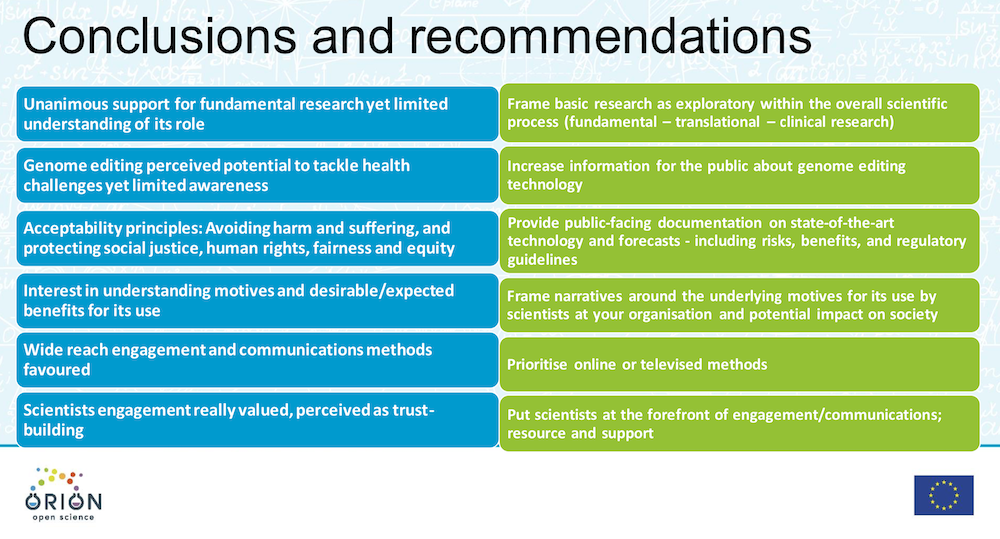 As the event drew to a close, there seemed to be an overwhelming sense that communication with the public in terms of potential societal impact of research is important and should be encouraged. Discussion highlighted the need for funders and employers to encourage and resource scientists to engage more proactively in discussions with society (on the ethical and societal implications of research).

Many participants acknowledged that engaging with the public can be an extremely valuable part of the scientific process. The findings from the public dialogue really showed how two-way dialogue can help to bring new perspectives to scientific problems.

The public, as beneficiaries as well as funders of scientific research through taxes, has a right to understand the potential applications and implications of important technologies like genome editing. Engaging citizens early on in the scientific process is crucial, allowing them to share their views and provide valuable input and enabling complex societal and ethical arguments to be raised and considered.

Please get in touch with Dr. Emma Martinez-Sanchez, ORION public dialogue Coordinator, Public Engagement Officer, Babraham Institute if you would like to have more information about the Public Dialogue.